From Wage Theft to Weed: 2019 Employment Law Trends and 2020 Predictions 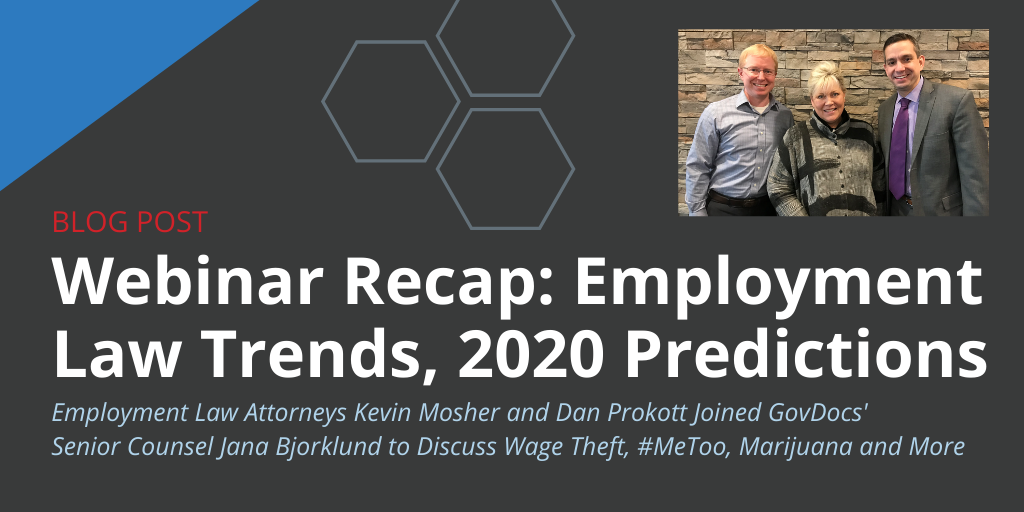 During the webinar, they discussed: wage theft in Minneapolis and Minnesota; the new FLSA overtime rule; pay equity; the #MeToo movement; and marijuana laws and drug testing.

It’s hard to imagine more employment law information packed into one hour… GovDocs on Dec. 18 welcomed two attorneys for a webinar focusing on the latest trends in the field, as well as predictions for 2020. 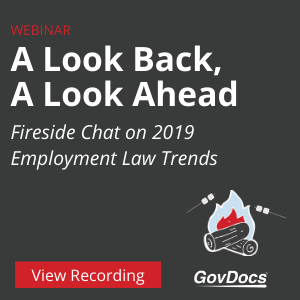 During the fireside chat-style webinar, the group held a wide-ranging discussion about the latest issues in employment law, including:

Below is a brief rundown of what they discussed. Click the image here to view a recording of the webinar.

The chat kicked off with the new wage theft laws in Minneapolis and Minnesota.

The group seemed to think the legislation at the state level was rushed, leaving some ambiguity for employers. Little thought was given to the impacts on payroll companies, as well as the nuances of recordkeeping and notice requirements.

As awareness of wage theft grows across the country, Prokott said criminal penalties associated with such bills could increase. Certain industries — construction in particular — should keep an eye on wage theft laws, he said.

Meanwhile, Mosher said the two laws will likely serve as a test case for the rest of the country and anticipated similar laws arising in 2020, given the non-divisive political nature of wage theft. He also advised employers to include everything in any list of deductions that “may be taken,” however remote the possibility could be.

Check out a blog from Bjorklund for a more detailed look at the differences between the Minnesota and Minneapolis laws. 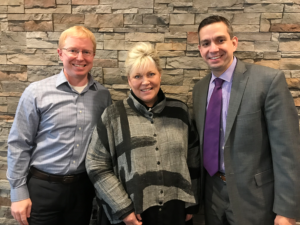 When the U.S. Department of Labor raised the salary threshold for exempt workers, it created a host of issues for employers.

Issued in September 2019, the Final Rule wasn’t as significant an increase as previous proposals, Prokott said. Also, employers should keep an eye on the exempt thresholds at the state level, he said, citing California as an example.

Mosher agreed that the increase to $35,568 for exempt workers will likely have more of an impact in the South and rural areas. Companies will have to estimate hours and determine how to classify certain employees, he said.

Another issue that has been in the news of late, pay equity prompted a good discussion.

Employers seem to be primarily focused on gender inequality at this point, Prokott said. When addressing pay equity at practical level, the issue for companies is twofold:

“Are you prepared to take action if you find (pay inequities)?” Prokott said.

Other aspects of pay equity concerns, Mosher said, include:

The discussion of laws related to the #MeToo movement started with the rise of mandatory harassment training.

“I think that’s going to be a trend,” Mosher said.

Meanwhile, Prokott noted the increase in the usage of the word “harassment” in the workplace, expanding beyond sexual harassment.

Many employers are opting to make training mandatory companywide rather than simply where certain states require it, Prokott said. With executives in the news regarding harassment issues, businesses don’t want to be the outlier making headlines.

Still, Mosher said it can be a tricky situation for employers: Could it be harassment or bullying? Or simply an employee who doesn’t like to be managed?

Lastly, the expansion of recreational and medicinal marijuana has created additional compliance concerns for employers.

In a tight job market, many employers have questioned the need to test for it.

“Why are we even testing for marijuana anymore?” Mosher said, echoing thoughts from employers.

Plus, HR departments can’t use it as a reason not to hire someone in some states where weed is legal.

Of course, with safety-sensitive jobs, or positions in which subpar job performance could harm someone else, marijuana usage should be approached with caution by employers, Prokott said.

Despite protections for usage in marijuana-friendly states, Prokott noted that, high or not, an employee can be terminated for poor performance in the workplace.

Get regular analysis of employment law trends. Keep an eye out for upcoming GovDocs webinars.

View the recording of our Dec. 18, 2019, webinar for more in-depth information and analysis.