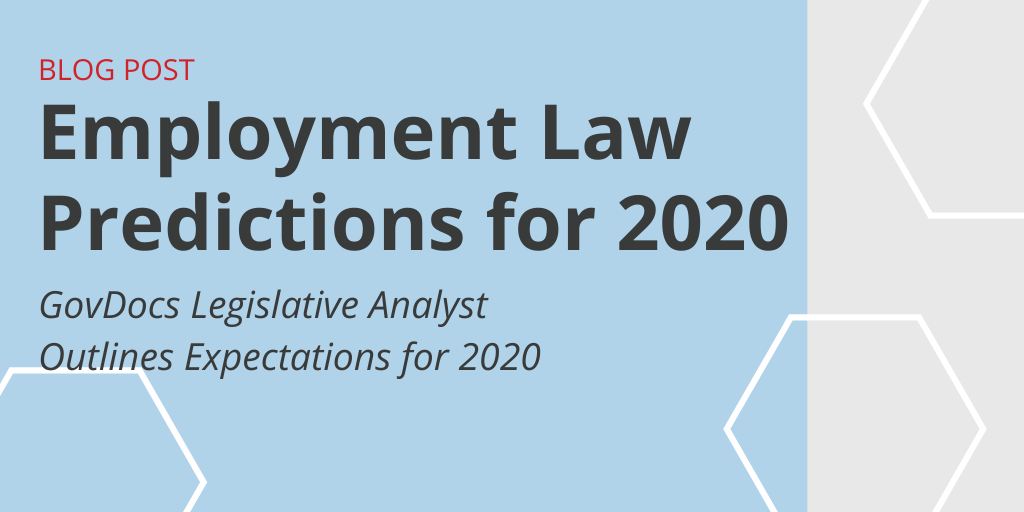 As 2020 gets underway, employers should already be aware of the laws that recently went into effect. But what about the rest of the year?

As 2020 gets underway, employers should already be aware of the laws that recently went into effect. But what about the rest of the year? Here are some 2020 employment law predictions at the federal, state and local levels.

At the federal level, it’s a bit difficult to predict what will move forward in terms of employment law. With the impeachment proceedings picking up steam, we suspect those will dominate the federal political landscape for the foreseeable future.

However, there is still budget work that needs to be done, and Congress recently negotiated a paid leave requirement for civilian federal employees, so it’s possible that those kind of closed-door deals could be made as a part of bigger negotiations.

Meanwhile, the U.S. Department of Labor has outlined its priorities for 2020:

At the state level many states have begun their legislative sessions and many bills are being introduced.”

When looking specifically at both our paid sick leave and employee leave topics, four states pre-filed bills dealing with a variety of paid leave topics:

In terms of raw numbers, we are seeing a major push for both paid leave and minimum wage laws:

Of course, all those numbers will have changed since this writing.

Other state-level employment law matters we will track as 2020 moves along include:

Finally, at the local level, we expect the upward trend in the number of labor law postings being issued by cities and counties to continue.

Generally, however, California and Colorado are the places we want to be watching.

As Colorado recently repealed its statewide preemption on minimum wage laws, Denver has already passed a local minimum wage. It will be interesting to see what other cities follow suit in 2020. Perhaps Boulder or Fort Collins could be next.

Elsewhere, in California, we’re noticing that many suburbs of the major cities are discussing increasing their minimum wages. While the major urban cities have already done so, the conversation is now spreading out to the suburbs, so it will be interesting to see what happens there.

Those are the things that we’re seeing now that could have potential in 2020, but there’s still lots of time for things to crop up.

As always, GovDocs will monitor the latest happenings and work to keep employers informed on the employment laws that impact them.

Adam Roberts, GovDocs Legislative Analyst, researches, tracks and analyzes all federal, state and local labor law legislation. He has a master’s degree in public policy and experience working as a researcher and analyst at the Minnesota Legislature.