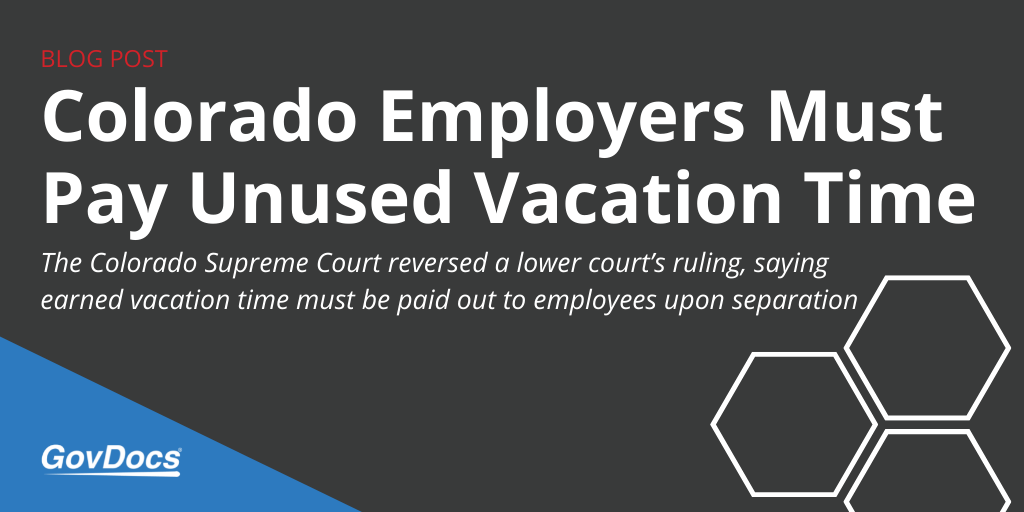 When it comes to unused vacation pay in Colorado, employers must pay it out, following a recent decision from the state’s supreme court.

Which means all earned vacation time must be paid out to employees upon separation.

“When an employer chooses to provide it, such pay is no less protected than other wages or compensation and, thus, cannot be forfeited once earned,” the court wrote.

Also, any agreement under which an employee would forfeit earned vacation pay is void, according to the Colorado Supreme Court in its June 2021 ruling.

The decision reversed previous precedent from 2019, when a lower court held that employers could craft policies that limit payouts of unused vacation time.

For background, the company involved had a policy saying employees are entitled to their earned vacation time unless they are terminated or quit with fewer than two weeks’ notice.

But the former employee argued she was entitled to the vacation time under guidance from state officials. (The worker did not dispute that she failed to meet the company’s conditions for paying out unused vacation time.)

Back in 2019, the Colorado Court of Appeals held that the agreement between employees and employers is what matters. Citing previous caselaw, the court also noted that the CWCA provides only minimal requirements regarding “when and how agreed compensation must be paid.”

Of course, the decision from the Colorado Supreme Court reverses that ruling and clarifies the matter for employers.

The news from the Colorado Supreme Court is one in a long line of employee-friendly moves from the state.

In addition to minimum wage above $12 an hour (and over $9 for tipped workers), Colorado has both paid sick leave and paid family and medical leave laws, though the latter faces a lawsuit. Plus, cities since 2019 have been able to set their own minimum wage rates, though only Denver has done so thus far.

Colorado also has a ban the box law, as well as legal recreational marijuana, creating other challenges for employers.

A “use it or lose it” policy is no longer permissible regarding accrued vacation time in Colorado.

Employers with locations in Colorado should review their paid time off policies and determine whether they align with the Nieto v. Clark’s Market decision from the Colorado Supreme Court.