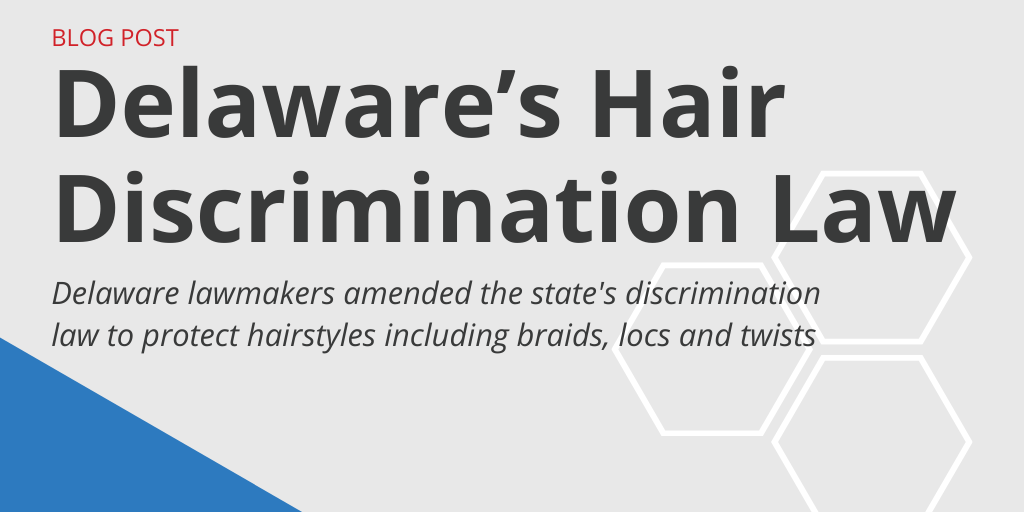 Delaware is the latest in a string of states that have enacted such laws. Just last year, Maryland and Virginia enacted similar legislation, following the lead of California, which was the first state to pass a hair discrimination law in 2019.

Signed by the governor earlier this month, the measure amends the state code relating to discrimination and now includes “protective hairstyle,” primarily those associated with race, such as texture, braids, locs and twists.

Delaware is the latest in a string of states that have enacted such laws. Just last year, Maryland and Virginia enacted similar legislation, following the lead of California, which was the first state to pass a hair discrimination law in 2019.

For employers, the amendment to Delaware’s law means companies cannot discriminate against an employee based on those types of hairstyles, in addition to other factors such as race, gender, sexual orientation, etc.

The synopsis of the law notes findings of a 2019 study:

“I was proud to sponsor Delaware’s CROWN Act and I join thousands of Delawareans in celebrating this important new law,” the bill’s sponsor, Sen. Darius Brown, said in a release. “This statute is part and parcel to establishing racial equity, fairness in employment, and ending race-based discrimination. It makes clear that traits historically associated with race — specifically hair texture and styles — are included in our definition of race and cannot be used to skirt long-standing anti-discrimination statutes. Hair should never define a person, their capability, or their place on this Earth and I am proud to have played a part in building a better, fairer future for all Delawareans.”

The law also applies to schools, as well as workplaces. Some may recall last year’s viral video of a high school wrestler being forced to cut off his dreadlocks to avoid a forfeit and sparked legislation in New Jersey.

The trend of jurisdictions creating these laws traces back to the CROWN Act initiative.

CROWN stands for Creating a Respectful and Open World for Natural Hair. The campaign was founded by Dove, the National Urban League, Color of Change and the Western Center on Law and Poverty.

In addition to Delaware and the states listed above, New Jersey, Colorado, Washington and Connecticut have passed laws banning workplace discrimination because of certain types of hair, primarily those associated with Black women. A number of other states have seen similar legislation introduced, as has Congress. Meanwhile, some cities, including New York and Cincinnati, Ohio, have also implemented ordinances related to hair discrimination.

For companies with locations in states with discrimination laws related to hair, employers should examine their practices and determine whether official changes to workplace policies is applicable.

And as racial issues continue to make headlines across the nation, employers may consider re-evaluating their workplace appearance standards in general.

Three Key Takeaways from Compliance and Coffee
Scroll to top