The 12 Days of Employment Law Compliance 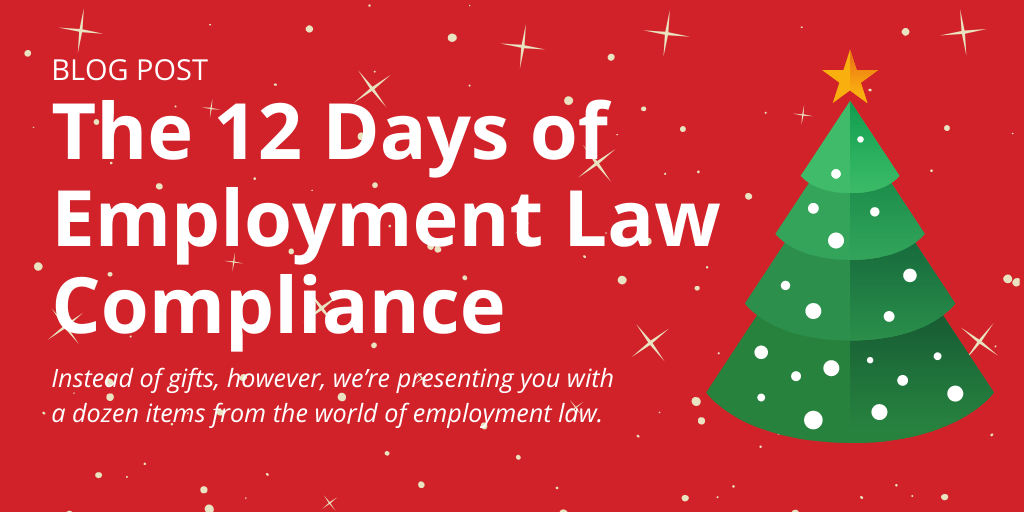 No. 4 on our list: Paid sick leave in Pittsburgh, where the city way back in 2015 approved its ordinance. It got hung up in the courts. For four years.

On the 12th day of employment law compliance my true love gave to me… Probably something to worry about — not drummers drumming or even a partridge in a pear tree.

With the holidays in full swing and the new year nearly upon us, we give you The 12 Days of Employment Law Compliance.

Instead of gifts, however, we’re presenting you with a dozen items from the world of employment law. Hopefully, these 12 facts, tips and resources will have you singing a happy tune.

The federal minimum wage was first established in 1938. Since then it has been increased 22 times, with 12 different presidents signing the legislation.

Most recently, the federal rate went up in 2009, which makes this current stretch the longest period the U.S. has gone without an increase.

Meanwhile, states, counties and cities have taken it upon themselves to create their own minimum wage rates, which is jolly for employees… but often makes tracking these laws a lump of coal for payroll professionals.

11 – States That Allow the Recreational Use of Marijuana

Along with the Washington, D.C., 11 states currently have legalized marijuana for recreational use. Plenty more have made medical marijuana use permissible under state law. (Of course, marijuana remains illegal at the federal level.)

This has also sparked other laws related to hiring practices — check out Nevada’s pre-employment drug testing legislation, for example. Don’t let your compliance procedures go up in smoke. Be sure to review local weed laws where you have employees, and that includes Canada.

Speaking of Canada, there are 10 provinces north of the border, each with its own labor law posting requirements.

If you have employees in Canada, make sure you don’t forget updated labor law posters, eh?

As we mentioned, states across the U.S. are setting their own minimum wage rates. In Nebraska, it’s exactly $9 an hour.

However, more than 20 states will see minimum wage increases at the outset of 2020. Best be prepared. You wouldn’t want your employees to think you’re a Grinch!

8 – States with Their Own Paid Medical and Family Leave Laws

Of all the employment law developments that have arisen in recent years, paid leave could be considered the most complex.

Eight states (along with D.C.) have passed their own paid medical and family leave laws.

Distinct from paid sick leave, these laws provide job protection for workers who take time to care of sick family members, among other employee benefits. And the differences between each state’s law is often as stark as the difference between Dasher and Rudolph.

Don’t believe paid leave laws are all that complex? Check out our tip sheet: 7 Fast Facts About Paid Leave.

You’ll find all sorts of useful and interesting information, including a law in Emeryville, Calif., that allows people to take time off to care for a sick service dog!

Compensation pros know the daily challenges of the job are always changing. That means they need plenty of tools in their toolbox.

Check out our infographic, The Compensation Professional’s Toolbox, for six handy items they have at their fingertips.

Who knows, maybe Santa will bring one of the compensation tools as a gift this year! 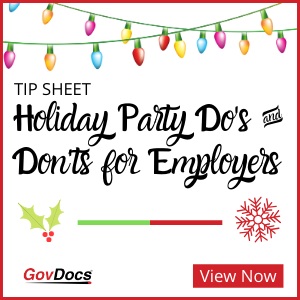 Holiday parties: Fun for employees, a nightmare for HR teams. Check out our blog for five things HR pros worry about at company holiday parties.

One in particular? Mistletoe. Just don’t.

Pittsburgh back in 2015 approved a paid sick leave ordinance. It got hung up in the courts. For four years.

But this summer, the Pennsylvania Supreme Court sided with the city, and Pittsburgh will be allowed to move forward with the paid sick leave ordinance, which requires employers to provide:

Like a child dreaming of Christmas morning, three cities in Texas — Austin, Dallas and San Antonio — have been waiting for their own paid sick leave laws.

All three have faced challenges in the courts. Despite times over the past few months when it seemed the new ordinances would go into effect, the paid sick leave requirements remain on hold.

This is a situation many in the world of employment law have been watching. We will see if the cities are able to unwrap their paid sick leave laws in 2020.

2 – States That Have Paid Leave for Any Reason

Paid leave laws are on the rise like tiny reindeer. And two states have taken the step to allow employees to use paid leave for any reason:

And a partridge in a pear treeeeeee…?

Nope. The final entry of our 12 Days of Employment Law Compliance list is the first city in Colorado to take advantage of a law allowing cities to set their own minimum wage.

As of this writing, Denver is the one city to move forward with a measure to create its own rate. The city moved quickly, with minimum wage increases starting Jan. 1, 2020. More cities in Colorado will likely follow suit in the coming years.

From Wage Theft to Weed: 2019 Employment Law Trends and 2020 Predictions
Scroll to top