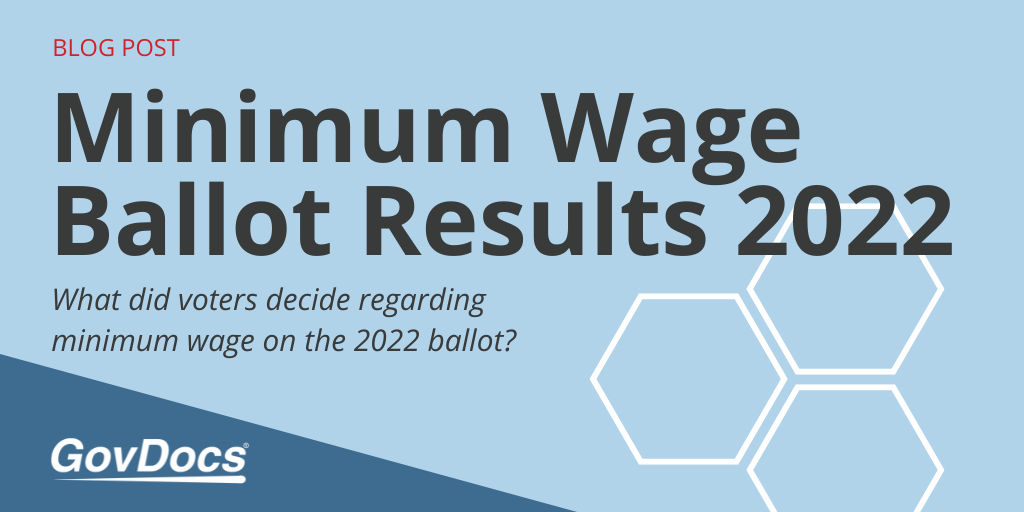 In what has become a growing trend in recent years, several jurisdictions put minimum wage laws before voters in 2022.

The minimum wage ballot results for 2022 are in.

Let’s get straight to the results.

Several cities in California in recent months had pushed for a new industry-specific $25 minimum wage for healthcare workers. And, regarding covered employees, they can apply broadly. In Los Angeles, for example, the ordinance would have applied to everyone from janitors to pharmacists at privately owned facilities.

However, the laws were all put on hold in some form or another.

But two California cities — Duarte and Inglewood — put the $25 minimum wage for healthcare workers on the ballot in 2022.

In Duarte, voters did not approve the measure.

Also, there will be a labor law poster requirement for Inglewood’s new minimum wage law, but it has not been released as yet.

Employers should note that other cities in California have also pushed for a $25 healthcare worker minimum wage and may want to keep an eye on those jurisdictions in the future, including the 2024 election.

In Nebraska, voters voted yes to Initiative Measure 433, which amends the state’s minimum wage law and will gradually increase the minimum wage to $15 per hour by 2026.

Currently, minimum wage in Nebraska is $9 per hour. Following the approval of voters, Nebraska will see a fairly aggressive increase schedule on Jan. 1 each year:

After that point, Nebraska’s minimum wage will be annually adjusted based on the applicable Consumer Price Index.

The approval amends the Nevada Constitution, effective July 1, 2024, to:

Voters in Portland, Maine, decided against the minimum wage ballot measure in 2022.

It would have eventually brought the city’s minimum wage to $18 in 2025.

In Tukwila, Wash., voters moved ahead with the minimum wage ballot measure, which will require certain employers in Tukwila to pay the same minimum wage as neighboring SeaTac, Wash., which has one of the nation’s highest rates for hospitality and transportation workers.

Finally, we come to Washington, D.C., where voters voted yes on the gradual elimination of the district’s tip credit (Initiative 82).

Employers will have to pay tipped workers the full minimum wage starting in 2027. It passed with about 74 percent of voters in favor.

Other Ballot Measures in 2022

While not directly related to employment law on the surface, legalized recreational marijuana has become an issue for companies in recent years. And five states asked voters to decide on legalized weed in 2022.

However, only Maryland and Missouri voters passed legalized marijuana, while North Dakota, South Dakota and Arkansas voted against it.

Nineteen states and Washington, D.C., allow the recreational use of marijuana; 13 states outlaw it entirely (including medical marijuana).

Lastly, voters in Colorado approved the legalization of the use of psychedelic plants and fungi.

As always, it bears mentioning that marijuana and psychedelic mushrooms remain illegal at the federal level.

From indexing requirements to ballot measures and industry-specific rates, employers that operate across the U.S. more than ever must keep a close eye on their locations to ensure they are paying the correct minimum wage rate.