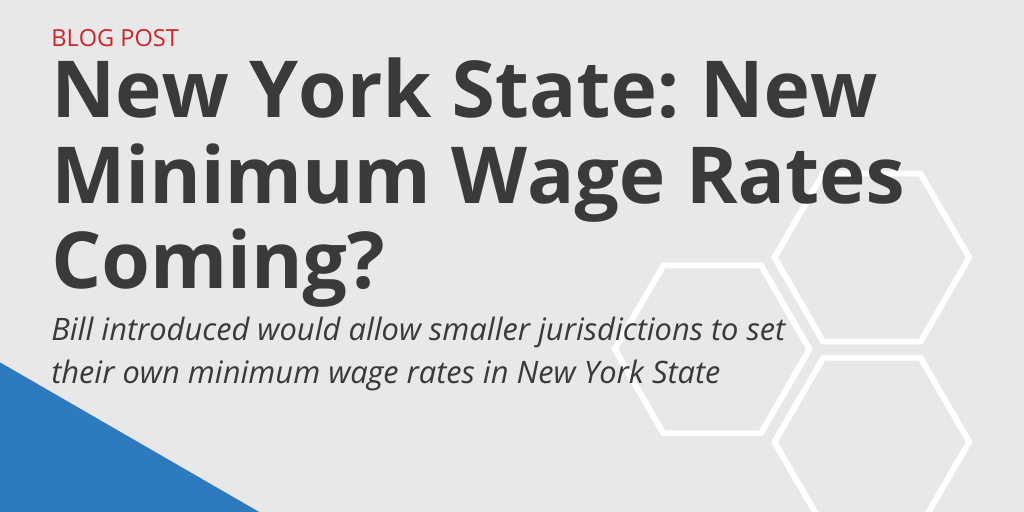 Introduced April 21, the bill would amend New York law to allow smaller jurisdictions to set their own rates.

New York State minimum wage could get more complex under a bill introduced in the state legislature.

Introduced April 21, the bill would amend New York law to allow smaller jurisdictions to set their own rates.

While New York State does not have a preemption law on the books, courts have interpreted state statutes as barring local minimum wage rates.

As part of the 2016-17 budget, the state set rate increases geographically. They have been going up over the past few years. Currently, minimum wage in New York is divided into three categories:

Under the proposal to amend the state’s law:

“Non-preemption clause. Nothing in this article or any other provision of law shall be deemed to prohibit any municipality from establishing or enforcing within its geographic boundaries payment of minimum wage of benefits standards that are higher or more protective than those established pursuant to this article.”

If passed, and observers deem it likely, it would take effect immediately.

As a refresher, minimum wage in New York is currently:

There are also separate rates for tipped employees and those in certain industries. Find more information on the state’s website.

It is also worth noting that New York is not the only state that separates its minimum wage rates geographically. Oregon employment law has a similar system in place.

Should Assembly Bill A7075 go through, it would open the door for more jurisdictions to set their own minimum wage rates.

And as the state numbers listed above indicate, New York is already among the more progressive in the nation in terms of minimum wage, which could be an indicator of how cities and counties would react if they were able to set their own rates.

Meanwhile, the bill would also enable New York City and the three counties to opt for even higher minimum wage rates.

The bill is currently in committee.

While the eyes of many large employers are on the potential for the Biden Administration to pursue a nationwide $15 minimum wage, lawmakers at all levels of government continue to take on the matter themselves. Already President Biden has signed an executive order that increases minimum wage for federal contractors.

Meanwhile, at the start of the year, 32 cities and counties increased their minimum wage rates, as well as 21 states. With the federal rate unchanged since 2009, and the pandemic putting a spotlight on low-wage workers, we could see more activity on the minimum wage front moving forward.