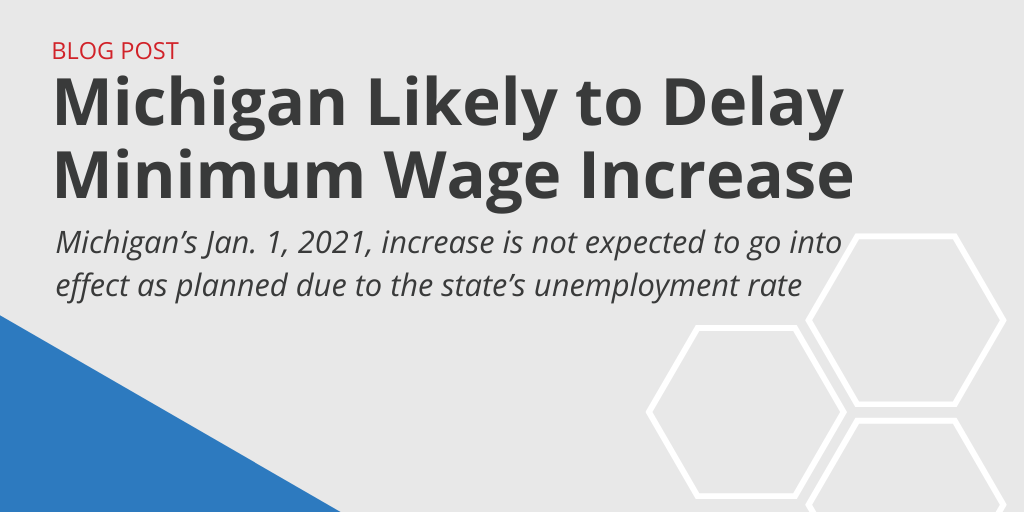 Michigan’s Jan. 1, 2021, increase is not expected to go into effect as planned due to the state’s unemployment rate.

Michigan officials on Dec. 11 announced the state’s scheduled Jan. 1, 2021, minimum wage increase is not expected to go into effect due to high unemployment numbers.

Under Michigan’s Improved Workforce Opportunity Act, passed in 2018, minimum wage increases will not go into effect if the state’s unemployment rate is higher than 8.5 percent.

UPDATE (Jan. 5, 2021): Michigan officials have updated the state’s minimum wage posting to reflect no increase for 2021.

“While Michigan’s October unemployment rate continued its downward trend and is 5.5 percent, the annual average from January through October currently sits at 10.2 percent and is highly unlikely to dip below the 8.5 percent threshold when (the U.S. Bureau of Labor Statistics) releases the final 2020 unemployment numbers for Michigan,” according to a release from the Michigan Bureau of Employment Relations, Wage and Hour Division.

Should the unemployment numbers hold as expected, minimum wage in Michigan will stay at $9.65 an hour in 2021.

The state does have separate rates for other types of workers, which would be:

Looking ahead, the next minimum wage increase in Michigan, should the unemployment numbers rebound, will take the state to $9.87, the figure it would have been at the beginning of 2021.

Check out Michigan’s minimum wage law for other employer requirements.

The economic impacts of the COVID-19 pandemic continue to reverberate across the world of employment law.

And Michigan isn’t alone in how current conditions have affected minimum wage.

Last month, Denver opted to move forward with its minimum wage increase after considering a delay. Virginia earlier this year decided to push back a rate increase.

Still, nearly 20 states will increase their minimum wage rates at the beginning of 2021, along with several other smaller jurisdictions.

Meanwhile, with the federal minimum wage static for more than a decade, there have been discussions at the national level to increase the rate. President-elect Joe Biden has voiced his support for a higher nationwide minimum wage.

In light of the announcement from the state, employers with locations in Michigan should review payroll processes that may have taken the increase into account.

While officials in Michigan seem to believe the minimum wage rate will not increase in 2021, a surge in job growth numbers could alter those plans.

The news from Michigan also highlights the everchanging nature of employment law and the need for companies to stay on top of any potential changes that may impact their locations.