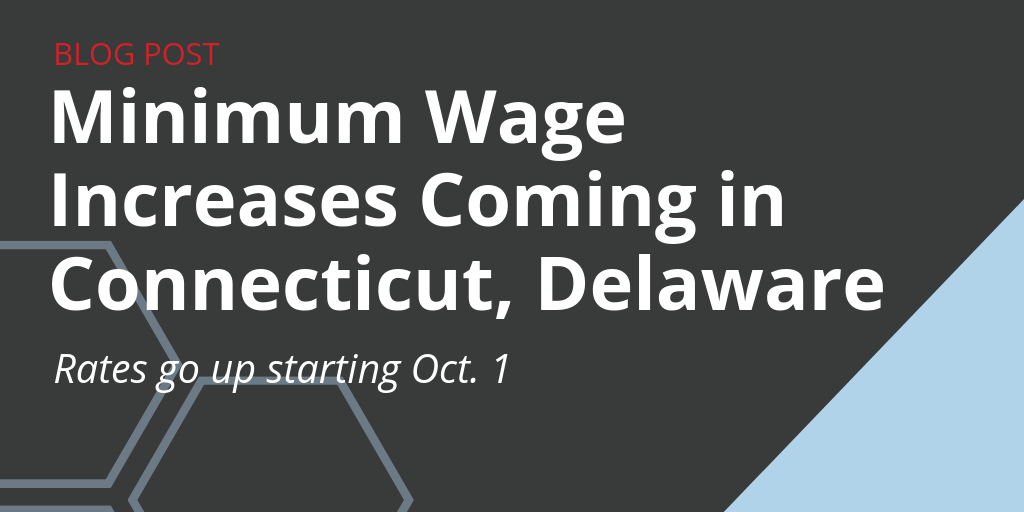 Though not as busy as midsummer or the turn of the calendar, Oct. 1 often brings minimum wage increases, as well. This year, it’s in Connecticut and Delaware.

The new hourly minimum wage rates for large, standard employers (non-tipped) in each state next month will be:

Also, the change means Connecticut employers will need a new labor law poster. However, Delaware’s related posting already has the 2019 minimum wage on it, meaning it’s unlikely to require new signage at this time.

While employers should prepare for these immediate increases, there are other items to consider in each state moving forward.

Now, the state is moving toward a $15 minimum wage. Following the Oct. 1 increase, it will go up incrementally until 2023 in a somewhat odd schedule:

Starting in 2024, Connecticut’s minimum wage will be adjusted based on the employment cost index (or its successor index).

While Delaware’s minimum wage increases to $9.25 in October, legislators this summer proposed a bump to $15 an hour.

The measure, if enacted, would take the state’s minimum wage to $11 in January 2020, with $1 increases until 2024, and future rates tied to the consumer price index.

However, the bill failed to pass during the 2019 session. The Delaware Senate president opted to hold off on a floor vote.

Connecticut this spring became the fourth state this year to pass a bill that will eventually bring minimum wage to $15.

Meanwhile, Kentucky lawmakers are renewing their efforts for a $15 minimum wage, and several cities and counties saw minimum wage increases on July 1, 2019.

In Colorado, lawmakers passed a bill in May that gives cities the power to set their own minimum wage rates, repealing a preemption bill. That has opened the door for Denver to explore the possibility of going to $15.

As jurisdictions continue to adjust minimum wage, employers must be prepared for increased personnel costs, as well as remaining compliant with local laws.