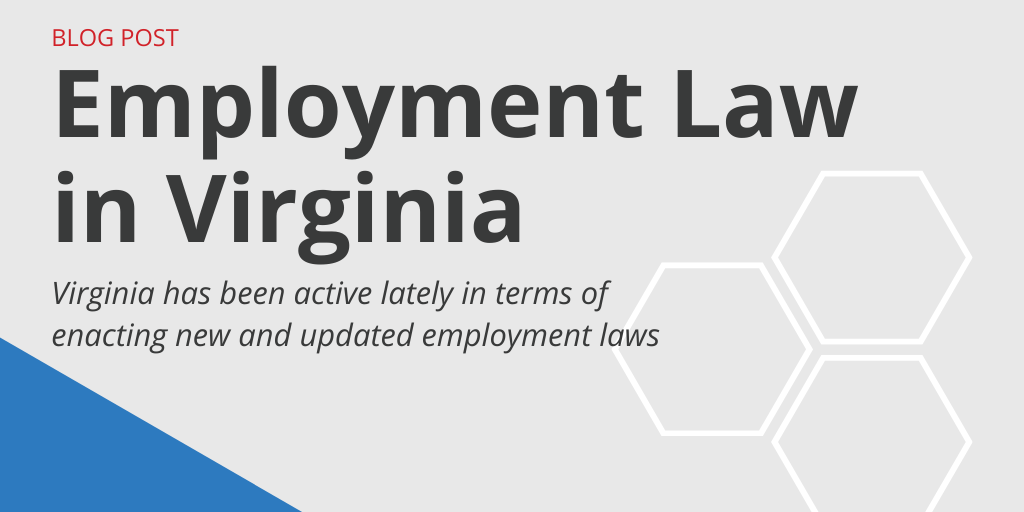 In this installment of our look at employment laws by state, we review Virginia and what employers need to keep an eye on, which includes the E-Verify labor law posting.

As was the case across the U.S., lawmakers in Virginia were busy during the pandemic, delaying a planned minimum wage increase and enacting workplace safety standards.

In this installment of our look at employment laws by state, we review Virginia and what employers need to keep an eye on, which includes the E-Verify labor law posting.

Virginia planned to increase the state’s minimum wage on Jan. 1, 2021. But the economic impacts of COVID-19 prompted the state to delay the increase until May 1, 2021.

Still, with the new rate now in effect, Virginia has joined several states with a minimum wage above the federal rate of $7.25. However, the minimum wage for tipped employees in Virginia remains at the federal level, $2.13.

Today, the standard minimum wage in Virginia is $9.50, with scheduled increases set for Jan. 1 each year:

After 2026, increases will be indexed.

Employers should also note that Virginia adopted a new training wage effective May 1, 2021. Under the new law, employers may pay employees in a training program 75 percent of the minimum wage for the first 90 days while training as long a certain conditions are met.

The state has also added a minimum wage labor law posting to its offering.

It requires employers to calculate the rate for hourly non-exempt workers as “the hourly rate of pay plus any other non-overtime wages paid or allocated for that workweek,” eliminating exclusions under the Fair Labor Standards Act, divided by the total number of hours worked in that workweek. Learn more about the Virginia Overtime Wage Act here.

Also on the wage front, Virginia in 2020 passed a handful of laws that created new employee protections for wage theft and imposed harsher penalties for violating employers.

Virginia was the fourth state to enact a law protecting employees from being discriminated against because of hair, specifically those typically associated with African Americans.

The amended legislation in Virginia specifically notes additional protections for “traits historically associated with race, including hair texture, hair type, and protective hairstyles such as braids, locks, and twists.”

Find information for pre-employment screenings and other information in our guide, Recreational Marijuana: What Employers Need to Know.

Virginia does not have any applicable paid leave laws at the state level.

These are but a few of the employment law issues employers must grapple with in Virginia.

The state’s department of labor has released a bank of other employment law resources for employers, with information on:

All this adds up to plenty of research time and compliance concerns for employers.