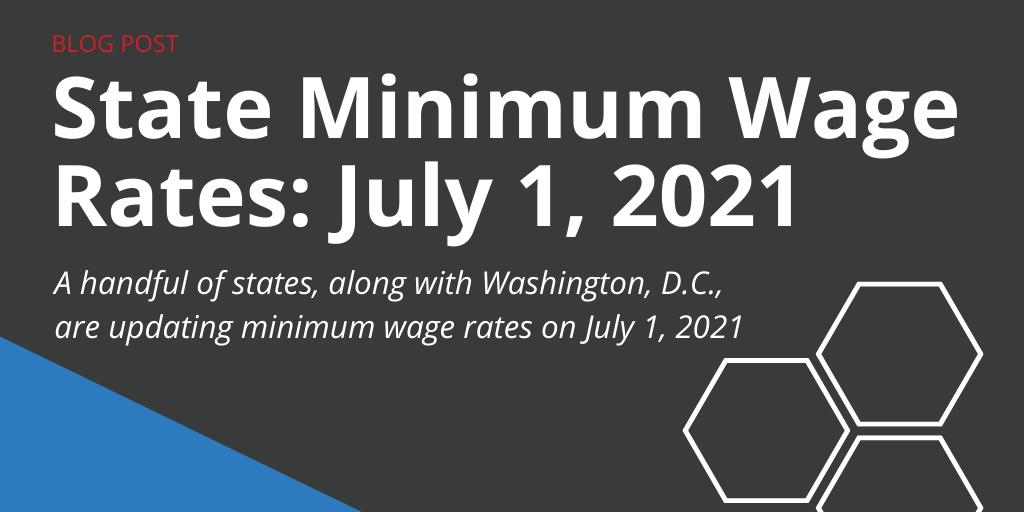 While not as busy at the start of the year, employers still need to ensure compliance with midyear minimum wage increases. (And there are also several July 1 rate updates at the county and city levels.)

State minimum wage rates July 1, 2021? There are a few updates of note.

While not as busy at the start of the year, employers still need to ensure compliance with midyear minimum wage increases. (And there are also several July 1 rate updates at the county and city levels.)

A few items to consider before getting to the list of states increasing their minimum wage rates on July 1:

Employers should review minimum wage laws where they have locations to maintain compliance.

In Nevada, the state the state passed an increase to its minimum wage rate in 2019.

Nevada is unique in that it has two different rates, depending on whether an employer offers health benefits.

The rates for both will increase annually by 75 cents until 2024. Nevada does not have a separate rate for tipped employees.

Also of note: The 2019 legislation, AB 456,  removed minimum wage exemptions the state’s high court ruled to be unconstitutional, including casual babysitters, taxi and limo drivers, and domestic employees who live in the home where they work, among others.

While most minimum wage rates in New York have updated on Dec. 31 each year, there is a change on July 1, 2021, that certain employers should be aware of.

Outside of New York City, the minimum wage rate for fast-food employees will increase to $15. That includes the counties of Nassau, Suffolk and Westchester. (No tip credit is permitted for fast food employees.)

New York defines fast-food establishments as those that:

Meanwhile, employers should also know that state lawmakers have introduced a bill that would allow smaller jurisdictions in New York to set their own minimum wage rates. Observers deem it likely to pass. Employers with locations in New York should keep an eye on the bill, as it likely would mean more changes for minimum wage rates across the state.

Oregon is another unique case when it comes to minimum wage. The state sets the rates and divides them by county.

Oregon does not have a separate rate for tipped employees.

For a full county-by-county breakdown of the rates in Oregon — as well as other July 1, 2021, county and city minimum wage updates — GovDocs will have our guide updated soon with new information.

We’ll slot the nation’s capital into our state roundup of minimum wage updates.

Starting in 2021, rates go up based on the Consumer Price Index. (With many jurisdictions having passed new minimum wage rates a few years ago, more and more employers will have to wait for the new rate to be published each year.)

There are some minimum wage exceptions. Find more information on the district’s website.

Even with only a few states (and D.C.) updating minimum wage rates July 1, 2021, there are plenty of specifics for employers to track.

With inaction at the federal level for more than a decade, many smaller jurisdictions continue to set their own minimum wage rates. The political climate across the country regarding employment law — notably surrounding minimum wage and paid leave — has come to the forefront during the COVID-19 pandemic, prompting lawmakers to take a closer look at new legislation.

As the nation rounds the corner on COVID-19, attention from legislators will likely return to the topics of note before the pandemic — including minimum wage. Large companies that operate in multiple states should continue to establish strong tracking and application procedures to remain compliant.