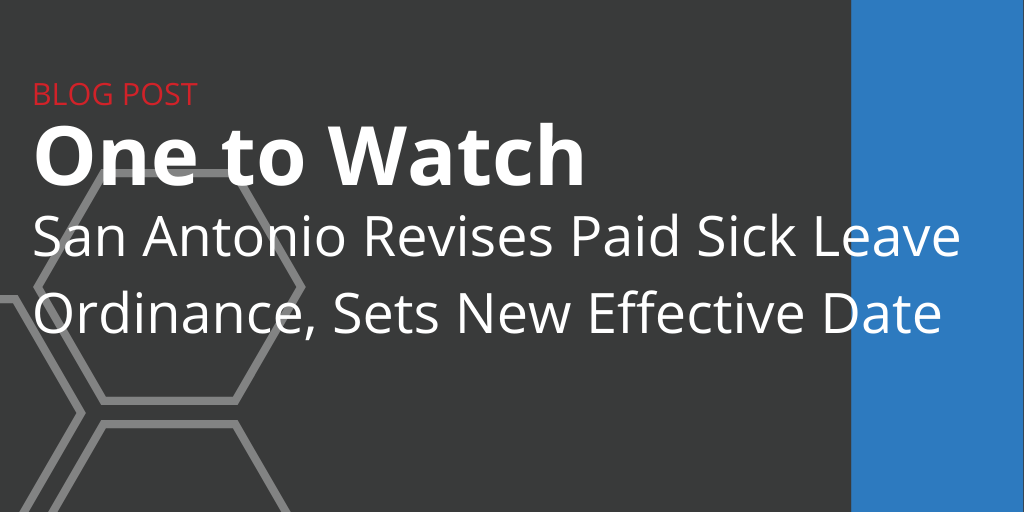 The changes to San Antonio’s ordinance, approved earlier this month, underscore the legal hurdles three major Texas cities — including Dallas and Austin — have had in implementing paid sick leave laws. All three faced lawsuits relating to the ordinances.

Update: Nov. 25, 2019: The ordinance is back on hold following a district judge’s decision.

Update, Nov. 7, 2019: The city has announced a new associated posting, in both English and Spanish. It is required for all employers.

Following an agreement in the courts, San Antonio’s Sick and Safe Leave ordinance was pushed back, while revisions were made to appease the concerns of business owners.

The measure will now take effect Dec. 1. It was initially slated to go into effect in August.

These changes, approved earlier this month, underscore the legal hurdles three major Texas cities — including Dallas and Austin — have had in implementing paid sick leave laws. All three faced lawsuits relating to the ordinances.

San Antonio has not yet announced a new posting requirement associated with paid sick leave measure.

Employees will still accrue an hour of paid sick leave for every 30 hours worked.

But the amended ordinance requires employers to provide at least 56 hours of paid sick and safe leave per year for full-time employees. This is a slight change from the previous language, which required a yearly cap between 48 and 64 hours per year depending on the size of the employer.

Meanwhile, several other specifics of the ordinance were updated. Among the primary changes:

For a closer look at the changes, San Antonio has put together a side-by-side comparison. Employers should be aware of the revisions and penalties for non-compliance.

Austin was the first of the three to pass a paid sick leave ordinance (in 2018), but a court of appeals found it in violation of the Texas wage law. It’s currently on hold, awaiting a decision from the state Supreme Court.

Meanwhile, in Dallas, there are also legal challenges in the works. But the city’s ordinance went into effect Aug. 1. The paid sick leave ordinance in Dallas was unchanged from its previous version.

Despite legal challenges to paid sick leave laws in places like Pittsburgh, there seems to be no slowing the tide of such measures.

Meanwhile, eight states, as well as Washington, D.C., have passed paid family and medical leave laws. And in Nevada and Maine, workers can use time off for any reason.

These new laws, and the related complexities for employers, will force companies to closely examine their policies and procedures to ensure compliance.