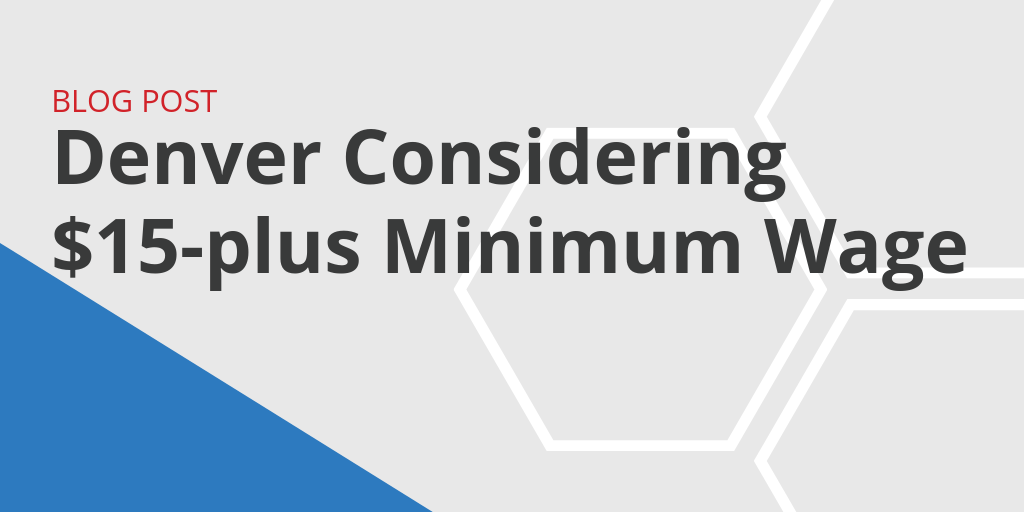 This spring, Colorado lawmakers repealed a ban on cities’ ability to set their own minimum wage, opening the door for Denver’s push for an increased rate. It’s the first city in Colorado to pursue its own minimum wage under the new law.

Update: The city has approved the measure, which is now in effect.

Just months after Colorado gave cities the power to set their own minimum wage rates, Denver city leaders are looking to do just that. A Denver City Council proposal would take the city’s minimum wage to more than $15 an hour in 2021.

This spring, Colorado lawmakers repealed a ban on cities’ ability to set their own minimum wage, opening the door for Denver’s push for an increased rate. It’s the first city in Colorado to pursue its own minimum wage under the new law.

If passed, the Denver proposal would increase the minimum wage for non-tipped workers to:

The current minimum wage for tipped employees is in Colorado is $8.08 an hour. Under the proposal, the minimum wage rates for employees who receive tips would be:

After that, increases would be tied to the Consumer Price Index, not to exceed 15 percent per year. The rate would apply to anyone who works in Denver.

More than 67,000 people in Denver earn less than $13.80 an hour at this time, a spokesperson for the mayor told The Denver Post.

The Denver City Council could vote on the proposal, initially introduced in mid-September, as soon as this November.

As the federal minimum wage rate hasn’t increased since 2009, cities, counties and states are taking up the matter themselves.

Most recently, Connecticut and Delaware saw minimum wage rate increases on Oct. 1. As the calendar turns to 2020, there will be additional changes in many jurisdictions.

Much of the push behind minimum wage increases is the “Fight for $15,” a movement that aims to raise the rate to $15 nationwide. Already this year, Illinois, Maryland and New Jersey have enacted laws to eventually hit a $15 minimum wage.

Meanwhile, Nevada recently passed legislation to increase its minimum wage, and lawmakers in Kentucky plan to introduce legislation for a $15 an hour minimum wage during the next legislative session.

And cities and counties across the country, especially in politically progressive states, continue to set their own rates.

Compliance officers, payroll professionals and others in the human resources field must keep a close eye on minimum wage to avoid complications that may arise from incorrect employee payments.

Employers’ liability can range beyond the repayment of back wages: